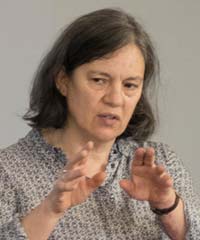 [2014] ‘Intellectual Trust in Self and Others’, in Religious Faith and Intellectual Virtue, Laura Frances Goins and Timothy O'Connor (eds.), Oxford; Oxford University Press, 2014.

‘Knowing is not a State of Mind’, in Duncan Pritchard and Patrick Greenough (eds.)Williamson on Knowledge. OUP 2009

My D.Phil thesis investigated a then neglected topic, how knowledge and justified belief is gained through testimony. Since then, I have worked over the years on developing a set of related ideas about testimony. I have argued against The ‘fundamentalism’ about testimony advocated by Tony Coady and others, and argued for a ‘local reductionist’ account of the epistemology of testimony. That is to say, a recipient accepts what she is told only if she has some empirical evidence – albeit of a broad non-specific kind – to believe her informant to be trustworthy about her topic. More recently, I have focussed on the nature of the speech act of telling, the social norms governing it. I see the socio-linguistics of this speech act as the core of a correct accout of each of us gains knowledge from what others tell us.

I also have an ongoing interest in core issues in philosophy of mind, and have published on self-knowledge, and on eliminative materialism.

Though not a historian of philosophy, I believe that philosophy is part of the humanities, not a science, and that its history is an integral and vital part of philosophy, as an interconnected set of systems of human thought and ideas. I enjoy teaching the core undergraduate paper, History of Philosophy from Descartes to Kant. It introduces students to the central themes of epistemology and metaphysics by engaging with the systems of ideas in classic texts, whose insights and are of permanent interest and value. Modern discussion of personal identity, to give one example, takes off from the classic discussion in John Locke’s Essay on Human Understanding.

I also enjoy teaching Philosophy of Mind, and the Later Philosophy of Wittgenstein. Though I have not published on Wittgenstein, my B.Phil thesis was an exegetical account of the deep and probing investigation of the nature of meaning and of necessity embeded in his celebrated ‘rule-following considerations’. I believe Ludgwig Wittgenstein was a philosophical genius of a unique kind, and that his work contains fundamental insights about the nature of mind, and of meaning, that philosophy cannot afford to neglect.

My own work is primarily in epistemology, and I enjoy teaching topics concerning the nature of knowledge, justification, and of course my own research specialisation of testimony.