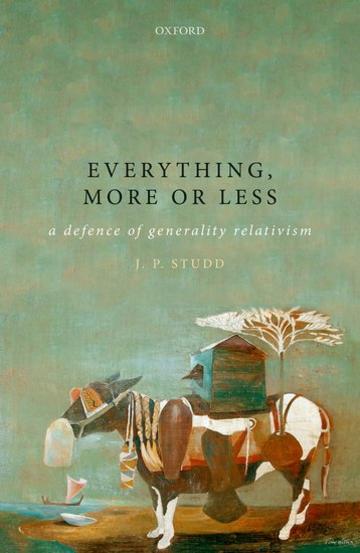 Everything, more or less: a defence of generality relativism (OUP, 2019)
James Studd

Almost no systematic theorizing is generality-free. Scientists test general hypotheses; set theorists prove theorems about every set; metaphysicians espouse theses about all things regardless of their kind. But how general can we be and do we ever succeed in theorizing about absolutely everything? Not according to generality relativism.

In its most promising form, this kind of relativism maintains that what ‘everything’ and other quantifiers encompass is always open to expansion: no matter how broadly we may generalize, a more inclusive ‘everything’ is always available. The importance of the issue comes out, in part, in relation to the foundations of mathematics. Generality relativism opens the way to avoid Russell’s paradox without imposing ad hoc limitations on which pluralities of items may be encoded as a set. On the other hand, generality relativism faces numerous challenges: What are we to make of seemingly absolutely general theories? What prevents our achieving absolute generality simply by using ‘everything’ unrestrictedly? How are we to characterize relativism without making use of exactly the kind of generality this view foreswears?

This book offers a sustained defence of generality relativism that seeks to answer these challenges. Along the way, the contemporary absolute generality debate is traced through diverse issues in metaphysics, logic, and the philosophy of language; some of the key works that lie behind the debate are reassessed; an accessible introduction is given to the relevant mathematics; and a relativist-friendly motivation for Zermelo-Fraenkel set theory is developed.