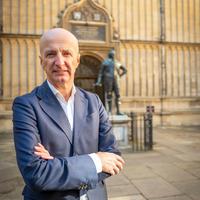 The Faculty’s first professorial post, the White’s Chair of Moral Philosophy has been endowed following a £2.8 million donation from the Sekyra Foundation. The post was established 400 years ago and a public event on Thursday 21 October marked the anniversary and the gift. This was a discussion on the topic ‘Is procreation morally wrong? Is it obligatory?’ between Professor Jeff McMahan, the current postholder, and Faculty members Professor John Broome and Professor Hilary Greaves. Professor Alison Hills chaired the debate. The event can be viewed at this link.

It has now become the Sekyra and White’s Professorship of Moral Philosophy in recognition of the Sekyra Foundation’s gift. The Foundation was established by Czech businessman Luděk Sekyra to support human rights, moral universalism, liberal values and civil society.

More details about the donation can be found here.